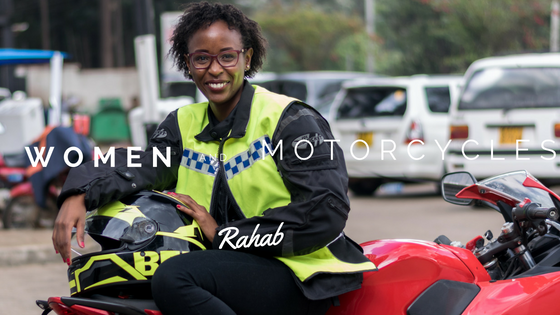 The post IFRD fever is still on and we continue to share more amazing women who are proving that motorcycle riding is for all. Next up is Rahab. Here is a snippet of her feature in Hadithi Picha’s original blog post:

“Our Women and Motorcycles photo series this week features Rahab. She has an adventurous spirit and loves anything that will take her outdoors, breathing the fresh air. She believes that there is so much to see and do in this world, one lifetime is not enough. An avid runner, she also plans to climb Mt Everest in the near future. She would go running in Antarctica and at the Everest Base camp. Her riding story is one to inspire you:

When did you start riding and what motivated you to take up riding ?

My bike arrived in the country in March 2016 and I slowly started riding then. My main motivation was to beat traffic. Back then it used to take me about an hour or more to get to the office and I was tired of it. I wanted to wake up, go for my morning run and still make it to work on time. And guess what? A bike was the perfect solution. The idea of taking long, out-of-town rides was also very appealing. I am a sucker for the outdoors and a bike would have me experience more of this.

Did you have to go through formal training? How was the training experience ?

I started by enrolling in one of the driving schools and took the practical classes. I however did not learn much though;  they just teach the basics, enough for you to pass the Government riding exam and that’s it. I later had to supplement that training with another course at the 2×2 Motorcycle training school. That’s where I got the skills to ride alone on these busy roads. I have also had an additional training session with Malibu from  InkedBikers. I believe that with motorcycling there is always something to improve on when it comes to your riding skills.

To read more about her biking journey, head over to Hadithi Picha’s Post

The longest distance I have ever ridden was from Ngong road to Karen and back,  during the last road test at inked. After that I heard there was a ride to Kajiado and I thought,  PDL check, just the bike and I’m good to go! Until nikapewa msomo of msomos by the one and only Malibu which scared me to the bones mpaka nikasahau story ya kuride na hivyo ndivyo PDL ili expire. I ended up going for the Kajiado ride anyway but as a pillion.
First thing that I noticed is how the ride was planned. The group leader was briefing the group on the ride,  and I was like,  why the briefing? Then she said she will lead and pointed to someone else who was the sweeper. I was like sweeper? Then it was time to go,  and there was a moment given for everyone to gear up,  and I was like obvious much? Then she said they would be riding at an average of 100kph if everyone was comfortable with that,  that’s when I began to pay attention and thought to myself,  see why you were not ready for the ride!!! Then we were off to the ride, and although I was a pillion, I was absolutely excited. We got to the roads and I began to see why the brief was important. Motorists were as excited as I was and you could see their distraction as the riders rode, and how essential it was to know who was leading, and who was sweeping. Needless to say we got to Kajiado with my backside on fire and swore I would never pillion again! (ended up being a pillion a couple of more times after that).
Fast forward to the IFRD 2018 and this time I thought I would ride. I had borrowed a bike and was riding around Ngong-Kiserian and I was preparing for the IFRD ride,  but about two weeks before the ride I realised I hadn’t broken into the bike for a long ride. When I heard the average kph at the IFRD briefing,  I knew I had made the right choice to cage.  While driving, we immediately felt the need to ‘protect’ our own after noticing other cars either getting too close to the bikers or moving too close to the outer lane leaving no room for a biker to overtake safely on the roads. I’m inclined to think that if all motorists thought like a biker I think there would be a lot less motor vehicle related accidents on the roads.
My overall lessons as a biker watching a ride were:
*1* Synergy is everything. When a group rides together,  they need to have one mind, and safety above everything. One of the things the leader said in the beginning of the latter ride is ‘don’t protect your formation at all costs’ meaning if a car wants to break the formation,  allow them to break the formation rather than protecting the formation and increasing the risks of accidents.
*2*. Everyone in the ride is a biker, whether caging or as a pillion. Same mental readiness is required, rules on substance intake apply to a pillion and a driver as well etc.
*3*. It is important to let the leadership know what the prerequisite /requirements are if you want to participate in a group ride. Details like if that ride is your first ride, how many hours you have ridden, accident cover, full gear, and average speed you are comfortable with etc. So you might have acquired the necessary hours for the ride,  but you are riding with a group of super bikers,  and you join the ride midway not knowing they had agreed on average 120kph but the highest you have ever done is 70kph, which means that that may not be your ride,  so you’d be better off re strategising and approaching the ride as an individual ride or drop off altogether from that particular ride.
In my opinion,  those two rides were very organised. One must be incredibly intelligent to plan and effect a successful group ride!
What are your thoughts? The briefing moment was  huge for me. I’m wondering what are some of the ways to have an effective group ride briefing?
And what are some of the ways to prepare for a long ride either group ride or solo ride?

Nahya Kuri is a biker, wife, mother as well as a Multi-talented musician and teacher of music.

We continue to celebrate Women bikers. Another amazing feature by Hadithi Picha. Our alumnus Agie got featured.

Here is a snippet of the original blog post:

We officially celebrated the IFRD on 5 May but we continue to celebrate extraordinary women (bikers). In our fifth feature we delve into Agie’s motorcycling world. She is a finance specialist in the airline industry and has been there for the past 28 years. At 52 years, with three beautiful children, Agie is full of life and young at heart. She loves music and enjoys traveling. She is your no nonsense kinda of girl and believes in one being truthful to self and others. Read along to get the full picture of her riding world:

When did you start riding and what motivated you to take up riding?

I always wanted to ride since my 20’s. I had a colleague who used to own a motorbike and once in a while he would drop me home on his bike. Riding has always been one of those things that I used to talk about. “Siku moja aki nita–ride Motorbike” , I always told myself. In  2016 , when one of my friends posted a picture of herself with a bike, a gift from her hubby, the riding bug bit hard. I decided it was time to do this and my riding journey started.

Did you have to go through formal training? How was the training experience?
When I was researching for a riding school, all the seasoned riders recommended formal training and that is how my daughter and I started training with Malibu from InkedBiker.

Upon training, I got to realize that riding is so different from what people think. It polishes your alertness on the road if you have come from driving a car. You become more conscious, you look out for anything and everything and notice things that you otherwise would not have whilst behind the wheel.
To read more about her biking journey, head over to Hadithi Picha’s Post 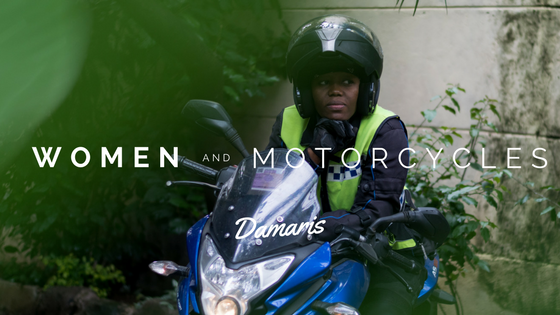 As we await to commemorate the International Female Riders Day in May 5, 2018, we continue to celebrate women in motorcycling. Today’s Hadithi Picha feature highlights Damaris’ motorcycling journey.

Here is a snippet from the original blog post:

Damaris graces our fourth feature in our amazing photo series, Women and Motorcycles. She is one adventure loving lady and always up to trying out new challenging things. Her love for venturing into roads less traveled led her into the world of motorcycling. So far she thinks it is the best ride of her life yet. Let’s plunge more into her motorcycling world:

When did you start riding and what motivated you to take up riding?

I began riding in 2015. All along I was passionate about the two-wheeled automobile. However, I was drawn to them particularly because of the convenience that comes with them (read bodaboda). At this point I thought all bikes were like the conventional bodabodas until I met other bikers after my training. I realized there were beautiful beasts out there and this only fueled my urgency to ride.

How was the training experience?

I did my training at InkedBiker after coming across them on the internet. Training was amazing especially after I gathered enough courage to start riding with my feet up. The bike became so light and motion was so exciting. I especially loved it when Malibu (the lead trainer and founder) would just let me go on countless rounds around the training field.

To read more about her biking journey, head over to Hadithi Picha’s Post